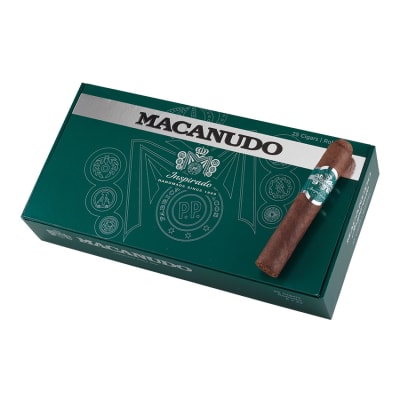 In this cigar review I smoke and review the Macanudo Inspirado Green. This cigar piqued my interest when I saw a email with these beauties on sale. I’ve had the Macanudo Red and Café in the past but never the Green so I thought I’d give it a shot. I went down to my local tobacconist Luke at REM’s Place in Grand Junction, Colorado and picked up a handful of the Macanduo Inspirado Green Robustos.

What does Macanudo say about the cigar?

Introducing Macanudo Inspirado Green, the intriguing new blend from the award-winning Inspirado line. Combining the unique flavors of Brazilian and Colombian tobaccos, Inspirado Green creates a uniquely provocative smoking experience. The smooth, velvety flavors of the Brazilian Arapiraca wrapper, combined with the unique earthiness of the Colombian Carmen Cubita and sweet, cedar flavors of Dominican Piloto Cubano tobaccos, create an incredibly rich and memorable taste that takes your senses on a journey to unseen territories.

What do I say about the cigar?

Initial Light: Before I lit the cigar, I took a couple dry puffs, or cold puffs. I got lots of sweet dark fruit like a fig newton. After toasting the foot and purging the cigar I was hit with lots of strong pepper flavors. Underneath the pepper was unsweetened cocoa and coffee.

First Third: Once I moved past the initial light the pepper became not so overwhelming and I got a strong taste of cedar.   Throughout the first third I got a buttery flavor on the long finish and the cedar taste became sweeter.

Second Third: At about the transition point between the first and second third I had to do a minor touch up on the burn. It wasn’t canoeing but just burning slightly uneven. I hadn’t had to ash so far and the ash was a bright gray. As I continued through the second third of the cigar the pepper and cedar balanced out and I lost the sweetness and butter flavors.

Final Third: Once I moved into the final third a cherry flavor became evident on the long finish. I haven’t had anymore burn issues and no construction issues have arisen.

Final Thoughts:   This is a good cigar. When I think of Macanudo I use to think about the old Café and how light it was. This cigar is not like that at all. It’s full body, cedar and cherry flavored gem. Would I buy a box of these? Probably. This cigar would be a good cigar to throw in the rotation. Would I take this cigar on the golf course, or smoke one while mowing the lawn? Probably not. I want to relax with this cigar, and I don’t want to lose it on the links, or over smoke it.

This site uses Akismet to reduce spam. Learn how your comment data is processed.